The Seventh Veil on DVD

The Seventh Veil on DVD

Extra: includes rare documentary in which James Mason returns to his home town of Huddersfield.

One summer’s night, once world-famous concert pianist Francesca Cunningham, escapes from her hospital room and tries to commit suicide by jumping off a bridge. Rescued by Dr. Larsen, Francesca is taken back to the hospital in order to undergo psychological treatment. Desperate to know what events drove her to this state of mind, Dr Larsen hypnotises Francesca and uncovers a traumatic relationship with her domineering guardian, Nicholas. Forced to endlessly practice the piano, Francesca’s deep psychological traumas have become hidden behind The Seventh Veil. Sydney and Muriel Box were commissioned to film a documentary about shell-shocked soldiers being treated with the help of hypnosis. Muriel began to think there was dramatic potential in the premise of hypnotherapy. The couple wrote the screenplay, and Sydney went on to produce the movie. The film was the biggest British box-office success of its year. It ranks 10th in the 100 biggest UK cinema hits of all time based on audience figures. 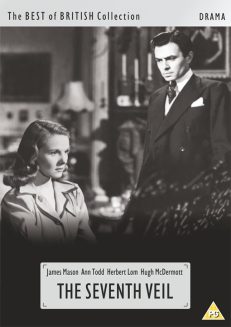