View cart “BOOK OFFER: WEST YORKSHIRE CINEMAS AND THEATRES” has been added to your cart.

The Smallest Show on Earth Book

AN AUTOBIOGRAPHY BY PATRICK CHURCH

From the 60s through to the present day, Patrick Church worked in the cinema, from Peterborough to Bury St Edmunds. In The Smallest Show on Earth
he describes his experiences in an autobiography that draws the reader into the trials and joys of life as a projectionist. The job was always low paid, but with the advent of TV, bingo and other demands on people’s time it also became a precarious one. Sometimes he had to plead his case as cinemas changed hands from ABC, to Odeon and bingo conglomerates, just to keep his job going and the buildings in operation. His passion shines through in this engaging book, as he describes a boyhood in post-war Britain, with the rare treats of cinema visits to see films such as ‘Cockleshell Heroes’ with Trevor Howard, or Richard Todd in ‘The Highland Rogue’ and playing at Dan Dare or Biggles with his brother. A first job at a local cinema for two pounds ten shillings a week led to a career as a projectionist, which he relives, interwoven with details of family life and the films he enjoyed. Patrick Church paints a personal portrait of his life in British cinemas, with nostalgic details that will bring back memories for many.

The Smallest Show on Earth DVD

This heart-warming comedy also co-stars Leslie Phillips, Bernard Miles, Sid James, Francis de Wolff, George Cross and June Cunningham.
The Smallest Show on Earth is a favourite here at TPTV HQ, as at times it does remind us of life ‘behind the scenes’!  As Bill Travers and Virginia McKenna struggle to make a go of ‘The Bijou’ cinema – a fleapit they have inherited – and Peter Sellers gives a heartfelt performance as an old projectionist who loves the old films they don’t show any more, we always feel some sympathy towards their struggle to keep the old cinema going!

“…the sequence in which projectionist Peter Sellers, pianist Margaret Rutherford and doorman Bernard Miles relive the glories of the
silent era is adorable.” The Radio Times 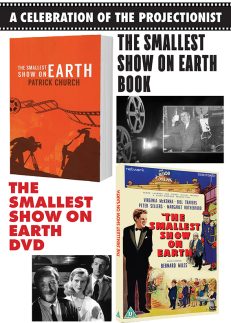 You're viewing: The Smallest Show on Earth – A Celebration of the Projectionist – Book and DVD £25.00
Add to cart