It’s Hogmanay 1957. A feisty bunch of Glasgow women meet at “The Steamie” to do the traditional family wash before the New Year.

Laugh at Mrs Culfeather’s Galloway’s mince; enjoy the fantasy phone call between Magrit and Dolly and wonder at the welly-booted tango when Dolly bends over backwards to grab a rose in her teeth! In 2009 The Steamie came second in an online poll of STV’s Top 30 Best Loved Shows. This is the definitive version of the most popular Scottish play of the last 30 years, with an all star cast including Peter Mullan in one of his earliest television roles as Andy, the whisky-loving handyman.

The Steamie has kept audiences in hysterics for over 25 years. Tony Roper wrote The Steamie for the Glasgow Mayfest in 1987. The original version was watched by millions when it was produced for television.

BONUS FEATURE: A documentary telling The Steamie story and how the play came to be an icon of Scottish culture, with interviews with writer Tony Roper and
actress Dorothy Paul. 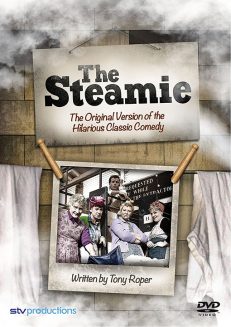