A truly great day out for fans of British film and TV from the 1940s, 1950s & 1960s. A variety of films, shorts and celebrity guests from the world of film and the eras we all love, on stage throughout the day. PLUS a selection of stalls selling film memorabilia, special book signings & DVDs.

Stalls seating is now sold out, seats will now be allocated in the circle, 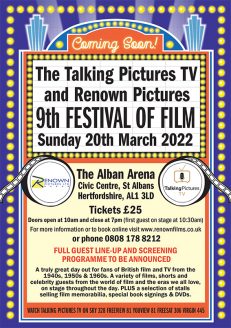