Directed by: Alfred Hitchcock. Hitchcock’s most celebrated British thriller, adapted from John Buchan’s novel. Richard Hannay becomes the victim of mistaken identity when a female corpse is dumped in his flat by a spy ring. He tries to track down the true murderers whilst being pursued by the police. Also included is the documentary Hitchcock – The Early Years. 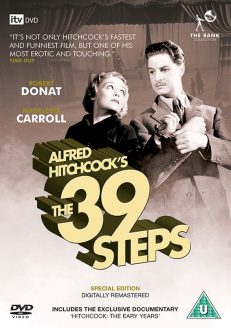