The Tiger And The Flame

Set in India this lavish historical drama tells the story of Queen Rani Laxmibai of Jhansi, who was one of the first Indians to rebel against the British Rule. Rani Laxmibai finds a prominent mention in history textbooks of India but Sohrab Modi`s film takes an in-depth look on the entire biography of the queen; from her childhood to her death. The film opens with the Queen`s childhood when she was known as
Manu and had the courage to face an elephant. When the chief adviser of Jhansi, Raj Guru (Sohrab Modi) sees her valour, he asks Manu`s father Moropant to get her married to the much older King of Jhansi, Gangadhar Rao (Mubarak). So the 9-year-old Manu is married off to the 50-year-old Gangadhar. The story unfolds on the life of Manu, her courage, political ascensions and her struggles against rivals. Photographed by Ernest Heller (who had shot Gone With the Wind, 1939) and was deftly cut by Russell
Lloyd (The Man Who Would Be King, 1975), this was the first Indian production to â€˜Go Hollywood`. 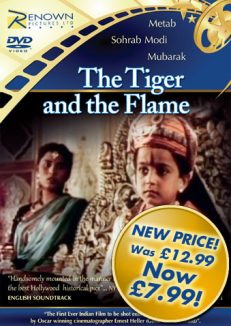 You're viewing: The Tiger And The Flame £7.99
Add to cart