From the Imperial War Museums Collection

Co-directed by Carol Reed, a feature length film produced by the Allied military during 1944 and 1945 as a record of the war campaign in Europe. It covers D-Day to the fall of Berlin, including Omaha Beach, the Falaise Gap, Caen, Arnhem, the liberation of Paris and the Battle of the Bulge.

BONUS FEATURES: also includes four full length war documentaries covering the campaign in Europe: FROM ITALY TO D-DAY; FROM D-DAY TO PARIS; FROM PARIS TO THE RHINE; FROM THE RHINE TO VICTORY… PLUS the unseen alternative ending to The True Glory. 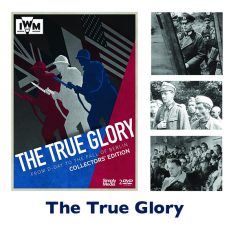 You're viewing: The True Glory (Collectors Edition) £10.99
Add to cart