THE DEFINITIVE COLLECTION ON ONE CD

Born in Newport, Isle of Wight Craig Douglas (born Terence Perkins) was employed as a milkman before becoming a professional singer, and was known to many as the ‘Singing Milkman’. Voted ‘Best New Singer’ in 1959 in the British music magazine, NME, Douglas went on to record eight cover versions of former American hit songs, in his total of nine Top 40 UK singles. Amongst that tally, Douglas had a Number 1 single in 1959 with Only Sixteen, which outsold Sam Cooke’s original version in the UK. It was recorded at EMI’s Abbey Road studios, with whistling by Mike Sammes, and released through Top Rank records. Douglas had four consecutive Number 9 placings on the UK Singles Chart.

His other top twenty hits include: A Teenager in Love (1959), Pretty Blue Eyes (1960), The Heart of a Teenage Girl (1960), A Hundred Pounds of Clay (1961), Time (1961), When My Little Girl is Smiling (1962), and Our Favourite Melodies (1962), all of which appear on this compilation. His early career bridged the gap between the end of the easy listening period, when the focus was on ‘crooners’ and the beginning of teenage pop music; his ability was to combine both styles. Douglas topped the bill on the Beatles’ first major stage show and also appeared in the 1962 film It’s Trad, Dad! with Helen Shapiro. He recently appeared on stage at the Talking Pictures TV/Renown Pictures film festival in St Albans in 2019.

3. A Teenager In Love

4. On The Sunny Side Of The Street

5. The Heart Of A Teenage Girl

7. A Hundred Pounds Of Clay

10. When My Little Girl Is Smiling

17. Carolina In The Morning 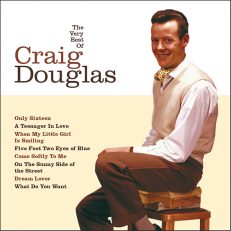