This Week Of Grace with She Shall Have Music

This Week of Grace (1933) British comedy film directed by Maurice Elvey and starring Gracie Fields, Henry Kendall and John Stuart. A poor, unemployed woman is made housekeeper at the estate of a wealthy duchess. It was promoted with the tagline â€œCinderella in modern dressâ€. It is notable for its songs written by Harry Parr-Davies, including â€œMy Lucky Dayâ€ and â€œHappy Endingâ€. Starring: Gracie Fields, Henry Kendall, Douglas Wakefield, Frank Pettingell, Minnie Rayner, John Stuart, Helen Haye, Marjorie Brooks, Nina Boucicault

She Shall Have Music (1935) A broadcasting magnate hires Jack Hylton and his orchestra to give a worldwide broadcast from a cruise ship. Business rivals plan to sabotage the broadcast and put the magnate out of business. Meanwhile, a female American singer for the orchestra falls in love with the magnate`s son, a highbrow who only loves classical music and not the jazz that she performs. We should be very thankful to Julius Hagen at Twickenham Studios for giving us a record of the look and sound of one of the greatest ever British dance bands, The Hylton Orchestra. Starring: Jack Hylton, June Clyde, Claude Dampier, Brian Lawrance, Gwen Farrar, Marjorie Brooks, Edmund Breon 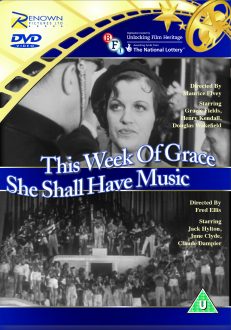 You're viewing: This Week Of Grace with She Shall Have Music £8.99
Add to cart