This 60th anniversary DVD release of the famous Ealing comedy features cinematography which has been digitally restored, bringing back all the freshness of the original Technicolor.

Written by T.E.B. Clarke, the story was inspired by the restoration of the narrow gauge Talyllyn Railway in Wales, the world’s first heritage railway run by volunteers. Shooting took place near Bath, on the Camerton branch of the Bristol and North Somerset Railway, along the Cam Brook valley. The Thunderbolt itself was represented by the Liverpool and Manchester Railway locomotive Lion, built in 1838.

LION The story of the real Titfield Thunderbolt

She starred in Victoria the Great with Anna Neagle and again in The Lady with the Lamp; Best known as the Titfield Thunderbolt, Lion is one of the most beloved locomotives in railway preservation – transformed from humble luggage engine to film star. Built in Leeds in 1838, Lion is the only surviving locomotive built for the pioneering Liverpool & Manchester Railway. After a working life of nineteen years, Lion was sold into industrial use in 1859. Drawing on extensive archival research and a detailed study of the original locomotive, this book explores the design and construction of Lion; her railway career and eventual preservation and restoration, as well as her film roles. Anthony Dawson has conducted extensive research, following Lion’s early career, which ended with dock duty at the Prince’s Graving Dock in Liverpool; her rescue and restoration, with descriptions of all the work undertaken; and her career in film. 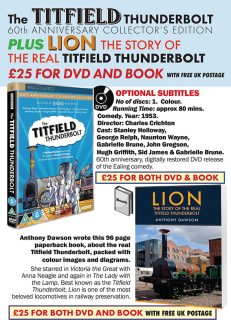 You're viewing: Titfield Thunderbolt Special Offer: DVD plus Book for £25 £25.00
Add to cart