Together is our popular daytime soap opera made by the ITV franchise Southern Television in 1980 and 1981. It concerns the residents of a block of flats (Rutherford Court) Actors feature include Carol Hawkins, Margaretta Scott, Kathleen Byron, Victor Maddern, and Sarah Greene. Episode writers included Rosemary Anne Sisson, Adele Rose, Phil Redmond and Alfred Shaughnessy.
The second series in 1981 was transmitted live. As of mid-2016, Together is being repeated on Talking Pictures TV.

The material/ tea towel is made in the UK and printed in the UK ðŸ˜€ Size is 34cm X 51cm
This is a bespoke item, all orders will be created and delivered within 10 working days of order. 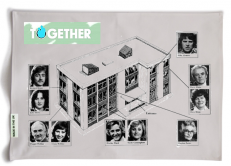