TOO MANY CROOKS on DVD

TOO MANY CROOKS on DVD

Billy Gordon, played by Terr-Thomas, is a tight-fisted, loose-living millionaire who  drives around in a Jaguar XK 150 and has hoards stashed away as a tax dodge. Fingers and his gang of criminals have the reputation for being the most dim-witted crooks London has ever seen. The incompetent gang fail in an attempt to rob Gordon and decide to change tack and kidnap Gordon’s beloved daughter instead, however, they err yet again and end up with Gordon’s wife Lucy. Hearing that he has refused to pay her ransom, his wife turns the tables on him, drawing on her expertise as a wartime PT instructor by marshalling the support of the crooks. 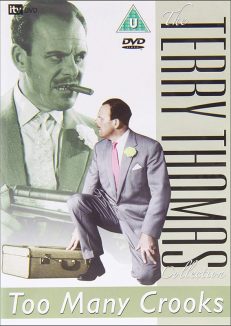