Too Young to Love + Bonus Feature

Based on the American play, Pickup Girl by Elsa Shelley and Filmed at Beaconsfield Studios, this highly moral and controversial film tells the story of a young girls slide into the world of prostitution, disease and abortion and her fight to redeem her life. Originally X rated it caused an outcry for the support of teenage children in Britain at the time.

Maurice Elvey directed this 1931 Twickenham production produced by the prolifi c Julius Hagen, stars: Mary Newcomb, Owen Nares, Edmund Gwenn. Lillian (Mary Newcomb) has an illegitimate war baby. The father, a soldier unaware of the situation goes off to war. Years later the soldier now a Colonel learns of his child and offers to marry Lillian to give his daughter a name and avoid the social stigma`s of that time. 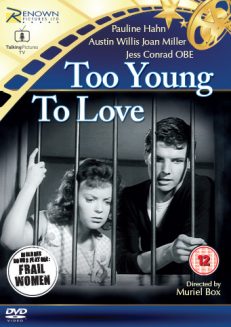 You're viewing: Too Young to Love + Bonus Feature £8.99
Add to cart