The action takes place in the Yorkshire steel town of Rawborough – Rotherham was used for the extensive location filming – to which native son Johnny Mansell (George Baker) has fled after racking up large gambling debts in London. Johnny moves into a cramped flat with his brother Dave (Terence Morgan), a clerk in a local steel mill, and Dave`s girlfriend Calico (Diana Dors), a hostess in a local nightclub. There is an instant attraction between Calico and Johnny, and it becomes apparent that the relationship between Dave and Calico is rather one-sided. It transpires that in an attempt to keep hold of her, he has embezzled -£300 from his employers which he has used to buy her clothes and various gifts. He now has one week to repay
the money before the firm`s auditors make their visit. Calico comes up with a plan.

BONUS FEATURES: Includes an episode of Burkes law starring Diana Dors Who Killed Alex Debbs? also A Wonderful Interview Extracts Of Diana Dors from the series Tell Me Another filmed in 1978.

The definitive whole heap of trouble herself, Diana Dors, melts the screen in this sizzling British noir from 1958. 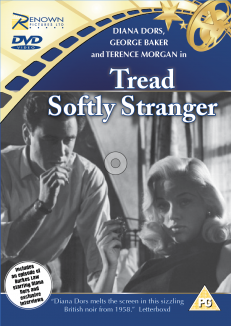