Based on a play written by Jack Hulbert, who also produced this Comedy Spy Caper and filmed at Worton Hall Studios, Isleworth. The King and Queen of comedy
together on film for the last time.

Dame Cicely Courtneidge (1893 – 1980) was the daughter of the producer Robert Courtneidge and made her first professional stage appearance in his play, The Arcadians at the Shaftesbury Theatre in July 1909. In 1916, she married her stage partner, Jack Hulbert and their careers encompassed the stage, radio, television and film. She also recorded popular songs such as Noel Gay`s, There`s Something About A Soldier. In 1972 she was created a Dame for her services to entertainment.

Jack Hulbert (1892-1978), studied at Cambridge and the Central School of Speech and Drama. Throughout the thirties, he successfully went on to act, write and direct films. After the war he and Cicely transferred their popular entertainment to the theatre and radio, performing revues and musical plays,
that encompassed their own brand of light comedy, song and dance.

In this lively spy caper, the male half of a married song-and-dance duo moonlights as a government spy. Using their special talents, the two investigate and expose a master-spy who has fitted a new kind of carburetor on his airplane. 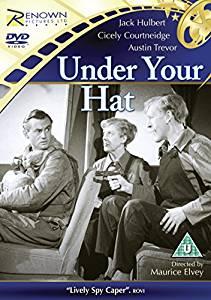