A Talking Book on 2 CDs.

This is a new audio recording adaptation of the successful spin-off stage play by Miles Tredinnick from the Frankie Howerd classic TV comedy. It features an all-star cast: Frazer Hines (Emmerdale/Dr Who) as Ludicrus Sextus; Cleo Rocos (The Kenny Everett Show/Celebrity Big Brother) as Suspenda; Tim Brooke-Taylor OBE (fondly remembered as one third of the TV comedy trio The Goodies and a panellist on I’m Sorry I Haven’t a Clue, on BBC R4 for 40 years) as Captain Treacherus; Jack Lane (Dad’s Army Radio Hour/Wisdom of a Fool) as Nausius; Madeline Smith (Hammer Horror star who appeared with Frankie Howerd in the films Up Pompeii and Up the Front) as Ammonia; Camille Coduri (Jackie Tyler in Doctor Who) as Voluptua; Rosa Coduri (Lucky Man/Jekyll and Hyde) as Erotica; Jilly Breeze (Da Vinci’s Demons) as Senna; Ben Perkins (Hedda Gabler, 2016) as Corneous and producer/director Barnaby Eaton-Jones. David Benson is the narrator.

As in the original TV series, Up Pompeii  is set in ancient Rome, peopled with outrageous characters including Lurcio’s owner, Senator Ludicrus Sextus and his family. Lurcio is caught up in the many sexual liaisons and hilarious situations that exist in his master’s house. Amidst the chaos, an ominous rumbling can be heard in the distance… 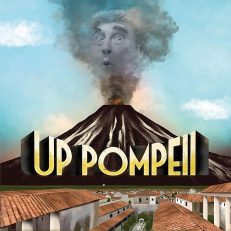