This box set contains all 68 episodes from the five series of Upstairs, Downstairs, originally transmitted between 1971 and 1975. The series takes place in a townhouse in London’s Belgravia, from the turn of the century through the Great War and into the 1920s. It features the Bellamy family: politician Richard Bellamy, his first and second wives Marjorie and Virginia, son James, daughter Elizabeth and his ward, Georgina Worsley. The house domestics are led by Hudson the Butler, who is in charge of the ‘below stairs’ household staff, including the cook, Mrs Bridges and maids Rose and Sarah.

Currently airing on Talking Pictures TV every Sunday at 6pm,
with a Friday repeat at 5pm. 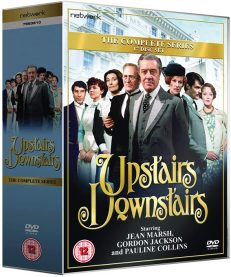