Private detective Edward Mercer (Richard Todd) is sent to Venice to find war-time Italian partisan Renzo Ucello (John Gregson) and reward him for aiding the escape of a wealthy American during World War II. On his arrival in Venice, all is not what it seems and Mercer attracts the attention of both the Italian police and shady underworld characters.

Discovering that Ucello was apparently killed during the war, Mercer believes his search is over; however, the police are interested, believing that Mercer is somehow involved in a plot to assassinate a leading politician.

Cold war intrigue abounds as the plot unfolds and the identity of a sniper is a shock to the authorities! Adapted by Victor Canning from his own 1950 novel of the same title, the film was shot entirely on location in Venice. 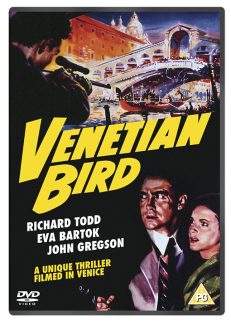