Two true stories of aviation heroism: Never Say Die and Steel Bats, set during the Battle of Britain in 1940, drawn by Ian Kennedy. A talented pilot who defends his country against immense obstacles, both technical and personal. A squadron undertakes heart-stopping missions to combat intense night-time assaults. Set against the backdrop of the Battle of Britain this enthralling collection of aviation and heroism features daredevil pilots and the lengths they go to, to stop the Luftwaffe.

Published in an oversized format to showcase the artwork.
56-page hardcover book, with illustrated end-papers.

Hugo Pratt is one of the greatest comic artists of all time. The Italian master’s distinctive lines and storytelling finesse made him a legend, yet his work on British war comics is largely forgotten. Here, restored and presented in a stunning new edition, is Battle Stations – a tale of terror and war at sea that first appeared in the War Picture Library in 1963. It follows three survivors of a Nazi naval attack as they seek their revenge on a U-Boat.

After World War II, Italian artist Hugo Pratt moved to London and worked for comic publisher Fleetway. He illustrated a dozen book-length war stories, but Fleetway were not interested in the book market. After serving in the navy during WWII, Donne Avenell returned to publishing. He was a prolific writer for the War Picture Library and Lion and also wrote TV scripts for The Saint. Ian Kennedy drew many issues of Commando and the Fleetway Picture Library, focusing on stories about aerial battles of WWII.

Remember the classic comics of bygone years, with beautiful black and white illustrations and stories of ‘derring-do’ and heroic bravery? Now you can relive those glory days of publishing with these fully illustrated reprints of full-length books produced by the same writers and artists. Those who remember the comics will enjoy reading them and they will be loved by the grandchildren! These nostalgic books make perfect gifts for lovers of vintage comics, providing hours of fascination and fun.

A gift for future generations to enjoy! 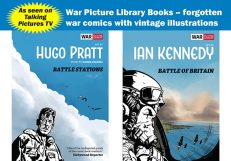