This celebrated propaganda film, based on the story by Graham Greene is a warning to British citizens to remain ever alert for the arrival of the enemy. A rare foray into darker material by
Ealing Studios, Alberto Cavalcanti (Nicholas Nickleby, Dead Of Night) tells the story of a quiet English village which has been infiltrated by German soldiers, leaving the plucky villagers to uncover the plot and fight back. 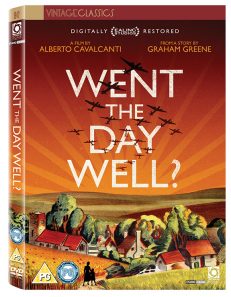