When You Come Home

Born at 50 Wigan Road, Aspull, Greater Manchester on 30th January 1901. Frank was a childhood friend of George Formby and both of them went on to become legends of their time. Frank was just 15 when he first appeared in the theatre as an acrobatic artist (under the name Arthur Twist). It wasn`t until 15 years later though that he achieved great popularity as a music hall comedian, whose wild and manic temperament brought a new style of quite risquÃ©, if not downright vulgar comedy to the stage.

For ten years Frank Randle ran his own touring company, Randle`s Scandals, which played to big
audiences all over the country, including headlining Blackpool`s distinguished summer-season show.
By 1950 he was Britain`s highest paid comedian.

When You Come Home is Randle`s 7th Feature Film. This 1947 Butchers production directed by John Baxter, who was a very sympathetic director with social awareness – Love on the Dole and The Common Touch were good examples, and in this film he brought out another level of Randle`s acting ability, other than the usual slapstick. Grandad (Randle) recounts to his grandaughter, his life as a music hall odd job
man – a must for all Randle fans.

Includes bonus feature ‘Randle & All That’ 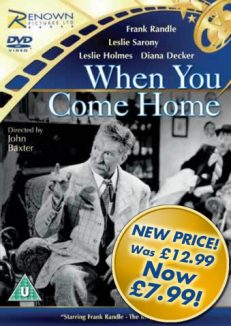