Think of your favourite British film, (or American movie filmed in the UK), made between the early 1950s to the late 1990s. There’s a huge chance Guy Standeven is in it. The Man Who Knew Too Much, Georgy Girl,  Operation Crossbow, A Clockwork  Orange, Star Wars, Four Weddings and a Funeral – you name it, he’s probably in there somewhere. He did film, TV, radio, theatre, voice-overs, print advertising and even found time to appear in Kate Bush’s Hounds of Love music video! Still fondly remembered from the classic children’s TV series Knightmare you will hear from many of his co-stars from that show as well as from Harry Enfield, Patrick Murray, Carey Harrison (son of Rex) and many more. He appeared with them all and here they share their memories of working with a much loved man. This is the story of one of the UK’s most prolific thespians.

The story of a ‘jobbing’ actor’s career covering over fifty years, told with style, good humour, packed with trivia and containing many unseen photos. Who’s that Guy? That guy is Guy Standeven. 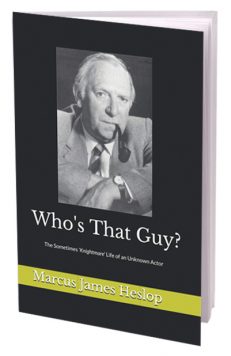