WINGS AT WAR: War in the Air in WWII on DVD

WINGS AT WAR: War in the Air in WWII on DVD

Wings at War uses extraordinary archive footage to tell the dramatic story of the air war in Europe during WWII. The programme begins with Britain’s fight for survival following
Germany’s rapid onslaught across Western Europe in 1939/40.

Despite the Luftwaffe’s failure to defeat the RAF during the Battle of Britain, the nightly bombing attacks on British cities and the threat to shipping convoys carrying vital supplies meant that Britain’s survival was by no means certain. The fight for Britain required flexibility, new aircraft, and luck. But the tide did turn and gradually the War turned in the Allies’ favour. In the second part of this absorbing story, the programme looks at the impact of the bombing campaign and the arrival of the US Army Air Force in Europe. 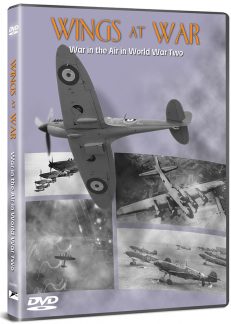