View cart “Child’s Play DVD” has been added to your cart.

Double-length musical holiday special. It’s Christmas Eve, a most important day for scarecrows as they must stand in position to guide Santa Claus back to the North Pole. Worzel Gummidge, however, deserts his post to enjoy the delights of the season, jeopardizing his chances for attending the Scarecrow Ball.

Originally transmitted during Christmas 1980, this 52-minute episode called ‘A Cup o’ Tea and a Slice o’ Cake’ was made as a festive family treat. The songs, written by Denis King, provide a pantomime atmosphere, Worzel singing about his life whilst propped up in the field as the winter snow falls is both funny and poignant. The action takes place on Christmas Eve which coincides with the Scarecrows’ Ball. Jon Pertwee excels in the title part, his voice and even movement combine to create an unforgettable character. Billy Connolly, leading a gang of bagpipe-wielding Scottish scarecrows, delivers a hilarious cameo role. Many household names
including Barbara Windsor and Bill Maynard add their own unforgettable performances. 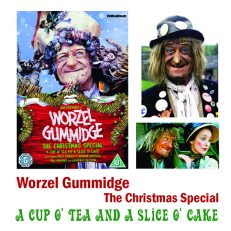 You're viewing: Worzel Gummidge The Christmas Special £10.00
Add to cart